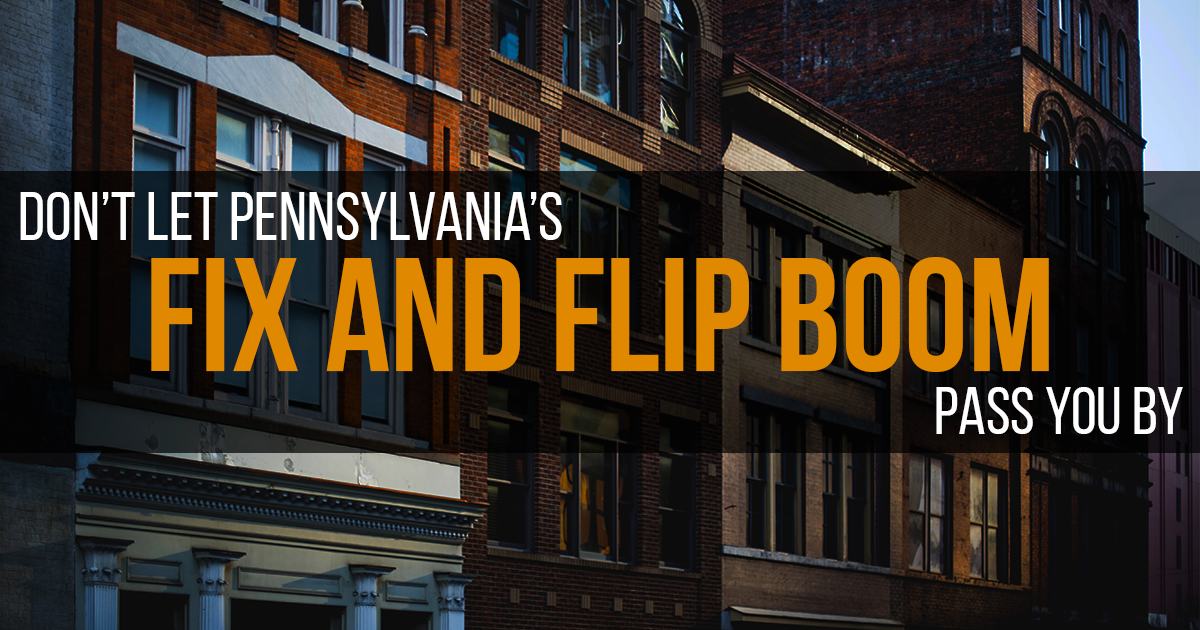 Have You Caught The Philadelphia Fix And Flip Bug?

The fix and flip market is booming, but that doesn’t mean every location is ideal for an investment.

With so many new investors battling for a share of profit, you need to start doing business competitively and analyze where others aren’t. The most effective way to get ahead is by digging into data and numbers. Separate from the pack by only entering into highly profitable areas for fix and flips.

The gap between novice and experienced investors is wide. Those with experience make their profit before a property is even purchased. They make it during the evaluation phase of a deal. Rather than throwing a dart at a map and seeing where it lands, they use preliminary research to evaluate property location economics. Successful investors are mathematicians. They use data and systems to guide their investments rather than speculation.

Data is everything for an investor. For the most part, numbers don’t lie and the numbers dictate that Pennsylvania is the most profitable state to fix and flip homes in the nation. If you’re a serious investor, and are close enough to be intimately involved in a Pennsylvania deal, consider pursuing a fix and flip deal there to generate a shockingly above average return.

Here are the cold hard numbers: Pennsylvania beats out every other state in the nation when it comes to average gross flipping ROI by a long shot. Coming in at 107.1%, Pennsylvania’s ROI is 11% higher than Ohio’s, the state that places second in the rankings.

Let’s break down the concept of gross ROI in home flipping. Amongst all of the terms associated with real estate investing, ROI is arguably the most important. It is a measure of how lucrative an investment is, expressed as a percentage or ratio. To calculate gross ROI for a flip, you simply divide the dollar amount of the return by the total dollar amount spent on an investment.

Using the average gross ROI for flips in Pennsylvania, let’s look at a hypothetical fix and flip scenario. Let’s say you spend $300,000 to acquire and rehabilitate a property in PA. According to the average ROI, you should be creating a return of $321,300 on the sale of that property! Theoretically, the home should sell for $621,300.

Although gross return does not take into account other likely costs associated with net return, the profit potential in Pennsylvania with an ROI of 107.1% is still exceptionally substantial.

According to RealtyTrac, 3 of the top 5 metropolitan flipping cities are in the state of Pennsylvania! Out of 85 eligible cities, this figure is worth noting.

Pittsburgh, PA boasts an average gross flipping ROI of 141.8%, the highest in the country. The next eligible PA city is Allentown with an ROI of 122.2%. Next is Philadelphia, PA with an ROI of 111.7%. Up and coming neighborhoods in metropolitan areas are the most sought after investment opportunities for fix and flip investors. Pennsylvania has 3 of the hottest locales to consider.

Philadelphia is the 5th largest city in the nation. It deserves consideration for potential fix and flip investments.

Outside of Center City, the flipping market is rapidly expanding due to an increase in foreclosures, under priced properties and gentrifying neighborhoods. Two of the most profitable markets within Philadelphia are Fishtown and Kensington.

Bordering Center City on the north east, Fishtown is the center of all things art, culture, and music in Philly. Boasting an eclectic vibe, it is becoming a sought out destination for the young and hip crowd. In 2016,  Fishtown flippers earned an average gross profit of $142,000 and an ROI of 178.9%.

With low entry price points and high profit potentials, Fishtown is perfect for fix and flip investments. It is also a thriving sellers market. 31% of buyers engage in bidding wars in Fishtown and 16% of homes sell above the original asking price.

Check out this case study of a success story in Fishtown.

The up and coming neighborhood is known for its coffee shops and independently owned small businesses that line the streets. There are also a number of transportation opportunities to consider including a SEPTA stop.

Since 2015, housing prices have appreciated roughly 10% in Kensington, a neighbor of Fishtown. Kensington attracts not only millennials, but other home buyers priced out of other areas in the city. Older crowds are considering it as an alternative to building or buying in exorbitantly priced neighborhoods like Rittenhouse.

The Millennials Are Coming

The success of the house flipping market in Philly can be attributed to a massive influx of millennials into the city. Since 2006, no major city has experienced a more significant increase in millennials than Philadelphia has. With so many first time home buyers moving in, flippers can capitalize on the need for modern, reasonably priced homes in developing areas where their peers are living. Gentrifying markets rapidly develop and appreciate, so it’s important to strike when they’re hot. Philadelphia is only a small part of a prosperous state for real estate investments. Pennsylvania has many appreciating real estate markets to consider, if you’re willing to do the research.

The numbers are clear: Pennsylvania is the hottest state in the country to invest in. The real estate market is volatile, though, and conditions change quickly. Right now, Pennsylvania is clearly in the midst of a seller’s market, making it the perfect opportunity for a savvy investor to locate a distressed and undervalued property and flip it for a big gain.

Pennsylvania is an emerging location for speculative real estate investments. Experienced investors will soon take note of trends and flood the market, diminishing potential profitability for you in the future.

If you’re looking to capitalize right now and beat out other investors, the returns are there for the taking in Pennsylvania.