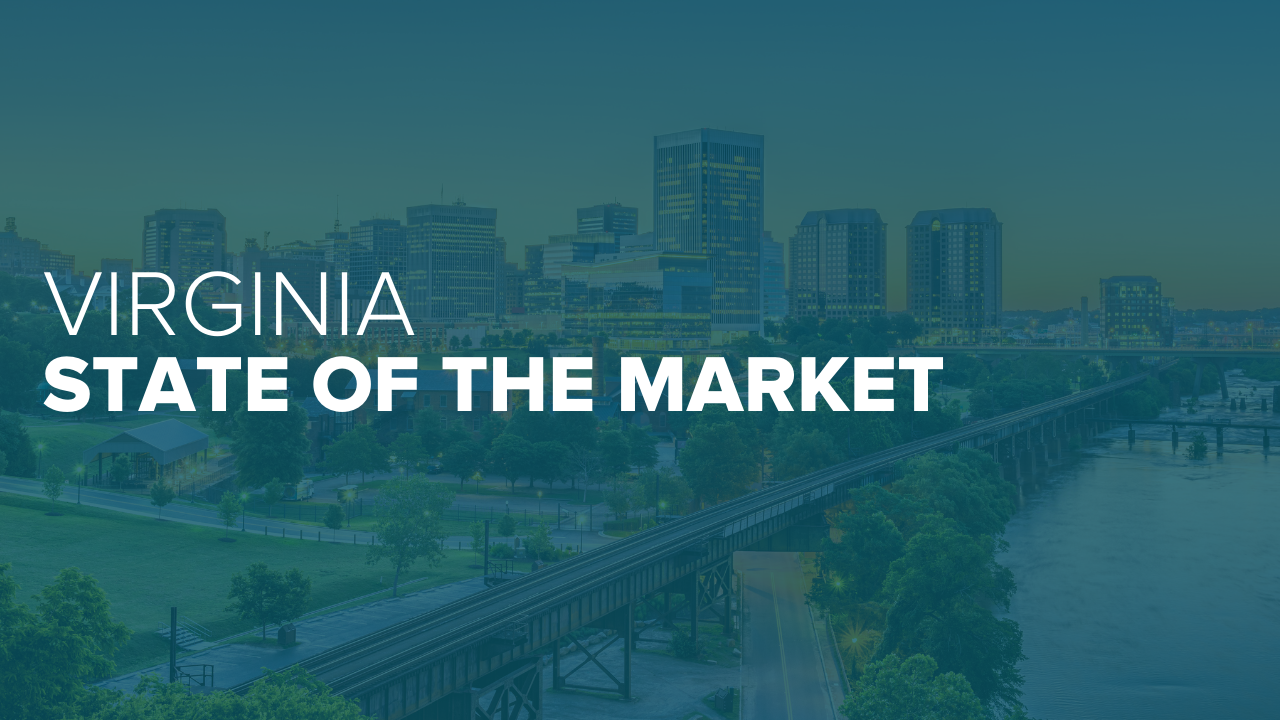 State Of The Market For Virginia Real Estate Investors

As direct lenders that partner with real estate investors in Virginia and beyond, we wanted to highlight some key stats and details to help our borrowers better understand the current VA market conditions. Historically low interest rates coupled with record low inventory has created a highly competitive real estate market that heavily favors sellers, so market knowledge can make the difference between missing an opportunity and another successful investment.

As of May 2021, the average home sale price for the state of Virginia reached $400,000 which is a 16% year-over-year increase and marks a 5-year-high for the state. Over 11,300 homes sold in the state throughout the month, marking an impressive 40% increase from the previous year and highlighting how hot the state’s market is. A major reason for the prices increasing is because the inventory for the area is shrinking away, with only 11,200 homes available throughout the state. While that number may look like a lot, that’s actually a 33% decrease year over year and represents a 5-year-low for the state. For context, May 2016 saw nearly 30,000 homes available throughout Virginia.

The rising demand and shrinking inventory have turned Virginia into a seller’s market with homes selling for an average of 102% of their initial asking price. Homeowners have realized the current value in their property relative to the market demand and, much like real estate investors, want to cash in on the trend. During the month of May homes were spending an average of only 16 days on the market, which is a staggering 27 less days than the average of May 2020.  All signs point to a hot seller’s market that benefits both homeowners and real estate investors- if they can manage to find a property in these competitive areas!

Now let’s dive into some of the current hot spots for real estate throughout Virginia including Woodstock, Virginia Beach, and Richmond.

Located in the northern tip of Virginia and just a few hours west of Washington DC, the town of Woodstock has slowly become a real estate hot spot. It’s a smaller area, with a population of approximately 5,200 and relatively flat population growth, but the real estate market is one of the most competitive in the state thanks to young families flocking to these suburban towns to find available housing. The current unemployment rate is sitting at 4.6%, which is less than the national average and indicates a healthy local economy- a good sign for real estate investors. As of May 2021, average home prices for the town reached $545,000 which is an impressive 95% increase year over year. The typical home sales in the area are seeing properties sell for 2% above listing price and sell in approximately 17 days from listing date. Very hot homes in the town are typically selling for 5% above listing price and selling as quickly as 5 days from the listing date.

By looking at common trends in the area, it’s easy to understand the buyer demographics are young families looking to grow. For example, listings that included finished basements, large family rooms, and pools sold for an average of 104% of the initial listing price, highlighting the important amenities for home buyers in the area. Understanding the market and who is attracted to the area can benefit real estate investors by focusing their renovations on the rooms most important to potential buyers.

The affordable rental prices in the area could make it a good starting point for buy & hold investors too. While studios and one-bedrooms have seen slight decreases in their average monthly rent, two-bedroom units have seen a 16% increase which marks a 5-year-high for the town. Investing in multi-family properties in the area could be a lucrative way to begin a rental portfolio in Virginia.

Virginia Beach is known as a popular vacation destination, but within the last decade has become a real estate juggernaut for the state- especially with its rental market. The local economy is rather strong as the tourist sector is always popular, with an unemployment rate of only 4.8% and a large population of 450,000 that has grown 3% over the last decade. With a mix of seasonal and permanent residents, there’s a lot of steady turnover and chances to sell or lease properties each year. As of May 2021, the average home price for the city reached $315,000 which is a 5% increase year over year and a 5-year-high for the city. Approximately 891 homes sold during the month and spent an average of only 17 days on market. Homes that are especially desired are selling for 5% above asking price and selling as quickly as 9 days from listing date.

There’s a wide variety of people interested in the Virginia Beach area, ranging in ages from young Millenials through Boomers and a mix of families with and without children. As of May 2021, the most popular home listings include amenities such as home office, pools, and new construction homes. These popular listings are consistently selling for 102% of their listing price, which is something to keep in mind for fix & flip investors or builders looking to cater to the market and ensure their property sells fast for the highest value.

While Virginia Beach has deals that could benefit fix & flip investors as well as new construction projects, the rental market is the real gem of the area, constantly ranking high among “top cities for renters” lists. Only 31% of the population rents versus owns, but that population is consistent and pays premium rent prices for the location with an average monthly rent of $1,316. Over the last three years, that rental price has grown 12%, indicating a very healthy and active rental market. The beauty of this area is that the rent is still less than the national average, making it an attractive location for tenants but also a consistent source of income from landlords. If there was only one city in Virginia that you could begin owning rental property, that city should be Virginia Beach.

Last but certainly not least is Richmond, the capital of Virginia and a massive real estate market with no signs of its growth being halted. Richmond has consistently been in the top half of Forbes and Business Insider lists regarding business and career growth as well as quality of life scores. The city’s unemployment rate is currently hovering around 7%, slightly above the national average, but its current job market has grown nearly 2% year-over-year and its future job growth over 10 years is projected at 37%, higher than the national average. As of May 2021, the average prices in the city reached $286,000 which is a 12% year-over-year increase and, like the rest of the list, marks a 5-year-high for the city. 791 homes sold during the month, a 15% increase from the previous year, and homes are staying on market for an average of only 7 days! The properties that are highly desirable are typically selling for 10% above listing price and selling only 4 days after being listed. To help highlight the demand: 70% of homes that are sold in Richmond are selling for above asking price, meaning the leverage is in the hands of the sellers.

The listings that are consistently receiving the most attention and highest prices include amenities such as finished basement, home office, and pool. These properties are selling faster and at an average 105% of the initial asking price. As stated earlier, these details are important for real estate investors to understand so they can cater to the market’s desires and achieve the highest price or rent for their property.

Similar to Virginia Beach, the rental market in Richmond is very strong and continuing to steadily grow every year. Currently 55% of the population rents instead of owns, making it an attractive location for buy & hold investors who are worried about being able to fill any vacancies. Average rent for the city recently reached $1,225 which is an 8% increase year over year, but still below the national average, which means an affordable choice for tenants and a steady monthly income for landlords.

Virginia was quietly becoming a real estate powerhouse in the mid 2010’s, but the recent health crisis caused a lot of movement to new cities and suburbs, which benefited this state. Nearly every city and town in the state has hit 5-year-highs in their average home prices, along with record lows in their inventory, causing the demand to continuously drive-up prices and create a hot seller’s market for investors. The state is seeing similar upward trends to its tristate area counterparts further north, but compared New York and New Jersey it offers a much more affordable barrier-to-entry for real estate investors that can manage to find a deal.

As many states did, Virginia put protections in place to protect tenants and homeowners from being evicted during the pandemic with tenant relief programs. While the state is one of few that was consistently taking eviction hearings throughout 2020, they had strict guidelines for which cases they would hear, and which would be delayed or protected under the national eviction moratorium. With the CDC-guided extension in place, the official moratorium on evictions is set to end June 30th. Afterwards, courts will begin hearing all eviction cases rather than a select few, meaning inventory will begin to slowly open up through the end of summer and well into the rest of 2021. As a real estate investor, start to do research on the neighborhoods and properties you’re interested in and be ready to move quickly to seize the opportunity in this competitive market.

Asset Based Lending is here to help investors and entrepreneurs achieve their financial goals through smart real estate investments. If you’re looking to be approved for our hard money loans for fix and flips or new construction, or are interested in financing rental property, contact us today.