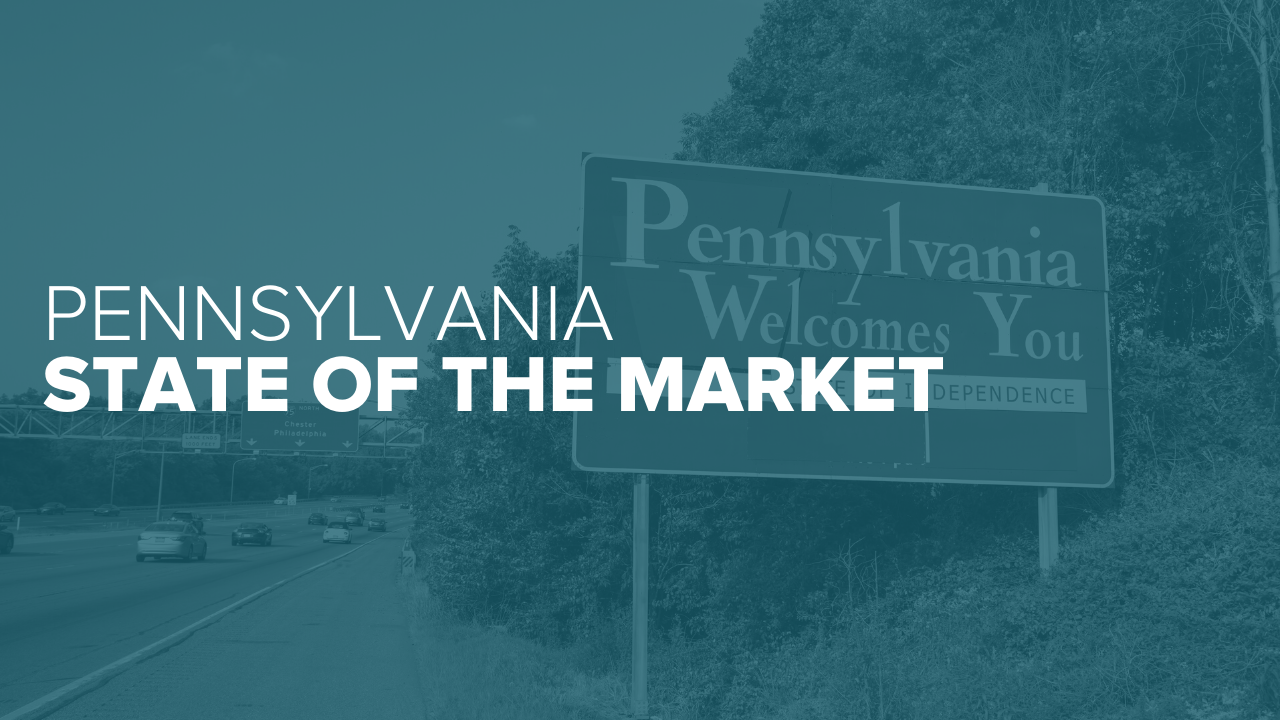 State Of The Market For Pennsylvania Real Estate Investors

As direct lenders that partner with real estate investors in Pennsylvania and beyond, we wanted to highlight some key stats and details to help our borrowers better understand the current PA market conditions. Historically low interest rates coupled with record low inventory has created a highly competitive real estate market that heavily favors sellers, so market knowledge can make the difference between missing an opportunity and another successful investment.

As of February 2021, the average home sale price for the state reached $250,000 which is a 6% increase from the previous year and hitting a five-year-high for the state. Nearly 8,500 homes sold in the state throughout the month of February, marking a 13% increase from the year before and highlighting the demand throughout the state. While the demand is there, the inventory is unfortunately shrinking away. There are currently 17,916 homes for sale throughout the state, which is 30% less than this same time last year. By comparison, the number of newly listed homes for the state is 13,190 which is a whopping 213% more homes than this time last year. Homeowners have realized the current value in their property relative to the demand and, much like investors, want to cash in on the trend. On average, homes are spending only 30 days on market which is 50 less average days than this time last year. All signs point to a hot seller’s market that benefits both homeowners and real estate investors- if they can manage to find a property first!

Now let’s dive into some of the current hot spots for real estate throughout Pennsylvania including Harrisburg, Philadelphia, and Pittsburgh.

Nestled in the center of Pennsylvania and just a few hours north of Baltimore, the city of Harrisburg has slowly become a real estate hot spot. This state capital has transformed into an economic centerpiece thanks to food manufacturers and supply chain industries pooling resources into the area. The economic boom and upcoming new jobs have helped the real estate market thrive post-COVID. The city features a healthy mix of owned and rented properties, making it a good selection for different kinds of real estate investors. As of March 2021, the average home sale price reached $160,000 which is a nearly 3% increase from the previous year. 181 homes sold during the month, which is a slight 1.6% drop from the year before. However, homes are staying on the market for an average of 9 days, which is a 67% drop from the previous year and an incredible stat for fix and flip investors. Harrisburg also offers a more affordable market for fix and flip investors with lower barrier-to-entry home prices than the larger Philadelphia and Pittsburgh markets, so someone could potentially chain together several lucrative deals in the area throughout the year.

The rental market is equally affordable, with the city’s cost of living hovering 30% lower than the rest of Pennsylvania. The average rent for the city is $940, far lower than the national average, and boasted a 4.5% vacancy rate pre-pandemic. While the vacancy rate did grow over the last year, the city’s current affordability is attracting home buyers and renters from all over the state, so the new influx of residents will begin to balance out and drop the inflated vacancy rate over time.

One of the hottest real estate markets of 2020 and one of the few tristate area cities to benefit from the residential shifts during the pandemic, Philadelphia is having its moment in the sun. As of February 2021, the average home sale price reached $260,000, which is a 7% increase year over year. Approximately 1,770 homes sold throughout the month of February which marks a 35% increase from the year before and is close to a five-year-high for the area. Homes are spending an average of 44 days on the market which is a 7% drop from the previous year and indicates a strong seller’s market. For comparison, a balanced real estate market tends to see homes spend an average of 60-90 days on the market.

The city is one of the few tristate rental markets that remained strong and saw some positive gains. While the average rental price did drop by 1% from the previous year, there has also been an 8% increase in rental applications and approximately 4% of renters currently in the city moved to the city during 2020. It bodes well for Philadelphia’s real estate market and general economic status that its renter population grew during this time, and since the average rent price trended upward year over year for the last decade, its likely to correct post-pandemic.

Pittsburgh has always been the beacon of western Pennsylvania, but its real estate market has become exponentially more valuable over the last few years. The market is currently at a 5-year-high for home prices in the area and is expected to continue growing over the next few years. As of February 2021, the average home sale prices reached $222,000 which is a 22% increase year over year. Homes are selling for $150 per square foot, which marks a 13% increase from the year before. Approximately 740 homes sold during the month which is a 10% increase from the previous year, and homes are spending an average of 68 days on market. These numbers point to a healthy and steadily growing market that favors the seller and will likely remain that way for the remainder of the year due to low inventory and historically low interest rates driving up home purchases. In addition, the population growth for the city continues to be dominated by young adults who are nearly approaching their time to own property or have already achieved home ownership. With this type of population demographic and economic status, Pittsburgh is set to be a strong real estate market for at lest the next few years.

The city continues to have a strong rental market as well after taking a slight dip several years back. Currently the average rent for the city is $1,256, which is a 1% drop from the previous year, similar to what happened in Philadelphia. 56% of the population rents, which is likely due to rent prices being below the national average as well as the city’s cost of living being roughly 7% below the national average. Affordable living expenses allows for more renters and thus lower vacancy rate, which pre-pandemic was hovering at 4.5%, and points to Pittsburgh’s rental market remaining strong for years to come.

Pennsylvania was already seeing consistent, steady growth throughout the 2010’s, and the global pandemic did not deter the growth in this new decade. In fact, it accelerated it in numerous ways throughout some of their biggest cities, causing hot seller’s markets with five-year-high home sale prices that are likely to continue to grow. The state is seeing similar upward trends to its tristate area counterparts but compared New York and New Jersey it offers much more affordable barrier-to-entry prices for real estate investors that can manage to find a deal.

As many states did, Pennsylvania put protections in place to protect tenants and homeowners from being evicted during the pandemic. While the official moratorium ended in 2020, there were additional protections put into place to help with rental and utility assistance, which has helped clamp down on inventory that would normally be opened to the public via auctions or short sales. While households could be eligible for up to 12 months of assistance for past-due and future rental or utility payments, it’s important to note that these protection programs will only continue until funds have run out, which is expected around September 2021. As a real estate investor, expect to see potential deals begin to spring up from August onward and be ready to move quickly to seize the opportunity.

Asset Based Lending is here to help investors and entrepreneurs achieve their financial goals through smart real estate investments. If you’re looking to be approved from our hard money loans for fix and flips or new construction, or are interested in buy and hold rental property, then contact us today.

State Of The Market For Virginia Real Estate Investors

As direct lenders that partner with real estate in...

The Deal: Property Purchase & Rehabilitation i...