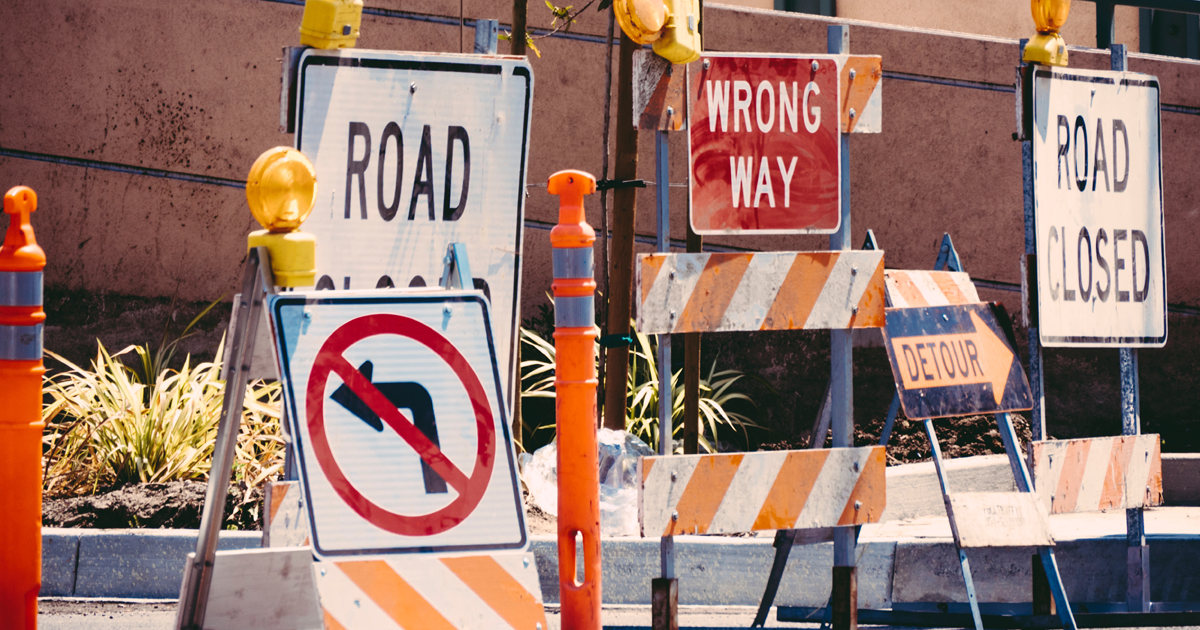 Everyone who invests in real estate is after the same thing: a good deal. Or a great deal.

But a lot of factors go into making that happen, including no shortage of due diligence as well as some hard-won experience.

But what’s just as important as the ability to spot a good deal? A knack for identifying poor deals. In fact, it’s probably even more important, as you’re better off doing no deal than purchasing a bad one.

Fortunately, there are some pretty consistent telltale signs that reveal whether a deal is wrong for you. Here are 13 signs of a bad deal:

Sure, it’s priced too high. But what, specifically, makes it overpriced?

If it’s the amount of repairs, you first need to decide whether they are the kind you can reasonably tackle. You don’t want a full-gut rehab or a foundation problem your first time out, no matter how desperate you are to get that first project under your belt.

If you’ve decided you can indeed take the project on, you can use that list of repairs to make a case for your offer. The seller may recognize the issues involved or they may continue to hold out.

Maybe the property has been available for so long because it’s in a bad neighborhood. Properties in high-crime or blighted areas will always stay on the market longer, even when priced correctly. In these cases, make sure you aren’t basing your decision on the lure of a low price alone; you should understand exactly what you’re getting into when investing in a rough neighborhood.

Other times, a seller simply has an unreasonable expectation of what their property is worth and nothing can convince them otherwise. In those cases, whether you’re dealing with the seller directly or communicating with a seller’s agent, the best you can do is to stay professional and remain on good terms. Sometimes the seller comes around, and sometimes they don’t. But if they’ve had a positive experience with you, you stand a better chance of them working with you if and when they do change their mind.

The numbers don’t work
Many an investor has bought a property even though the numbers said otherwise. Why would they do that? Often, it’s because they get caught up in thinking they can find a way to make it work or they’re desperate to land the next deal.

Believe the numbers. If they tell you it’s a bad deal, resist the urge to erase what you don’t like — fudging it to make the ARV (after-repair value) higher or to make the rehab lower.

If you find yourself going back to the numbers and trying too hard to make them work, consider walking away. Repairs typically wind up higher than originally anticipated, and properties generally don’t sell for more than you hoped … not the other way around.

Too many things need to line up perfectly
Along the same lines as the numbers adding up, if you find yourself engaged in wishful thinking, back off.

Wishful thinking is when you realize the project is iffy, but you find yourself saying things like, “Well, if there’s no rot underneath the siding and if the plumbing has no leaks and the boiler works perfectly and if we don’t need to actually replace the kitchen cabinets but can just paint them instead, it’ll all work out.”

Or something to that effect.

Instead of approaching a rehab project with your fingers crossed, expect that anything that can go wrong will go wrong. Of course, some rehabbers are guilty of over-estimating repairs and losing deals that way. The key is to learn to accurately spot warning signs so you can better identify when something is likely to be an issue and when it’s not.

Lots of cosmetic fixes
It’s an oldie-but-goodie: the ole “paint over the water stains” trick.

Beware of any property that appears to have an abundance of cosmetic repairs that might be intended to cover up problems. These include the aforementioned paint job as well as things like filler in cracks in foundation or other areas where a seller might have tried to mud and paint over a problem area.

Sellers may also try to make the interior look extra spiffy to distract from other problems. It’s fairly easy to paint walls or even refinish hardwood floors, but don’t let that fool you into skipping past a close inspection of the furnace, clues to whether the basement gets wet, or the condition of the roof.

Missing permits
Town Hall often contains a wealth of information about a property, from the assessor’s card to title history to the permits that were pulled. Or not pulled.

It’s always a good idea to check your local town or city hall and research a potential purchase, especially if you see renovations, additions, electrical upgrades and the like.

If work has been done and the proper permits weren’t filed, be wary. Not only does that leave open the possibility that the work was done poorly, but it also leaves open the possibility that you could wind up responsible for fixing it. An inspection down the road can leave you liable for re-doing shoddy work and for having an inspector issue an approval that should have been done before.

These include things like a bedroom that can only be accessed by walking through another bedroom, or too few bathrooms for the number of bedrooms.

Functional obsolescence is somewhat subjective, but it often comes down to determining the expected features for the price point as well as today’s tastes. For example, it can be tough to market a house with a master bedroom on the first floor and two bedrooms on the second floor, as buyers with children don’t typically like being on a separate floor.

It might also include a lack of closet space or a basement that can’t be used for much more than storage (think of a 100-year-old house with a stone foundation and low ceilings, for example.).

Of course, this is only a bad deal if you can’t fix the problem. This comes back to the notion of understanding what you can reasonably tackle. Functional obsolescence can be a pricey undertaking that includes taking down walls or building additions… but with the right experience and the right calculations, that problem that scared others away is an opportunity for some.

Property is in a flood zone
This isn’t an automatic no-go but be aware that it can be harder to sell a property located in a flood zone. Your end buyer is going to need separate flood insurance, which can get expensive.

You may also need to take this into consideration with the type of renovations you do, from installing systems that keep basements dry to seawalls or special landscaping.

So unless you’re dealing in beachfront properties where buyers expect to shell out for flood insurance, be wary of properties in these zones.

Listing only shows exterior photos
We’ve all seen this one: the listing that only shows photos of the exterior. Some even go so far as to include a dozen photos or so — front of the house, rear of the house, the deck, the side yard, the beach down the street, and so on.

If the listing neglects to include any interior photos, you can bet there’s something wrong with it. This may not be a deal breaker, but it’s a sure sign that something’s off. Perhaps the property is simply dated, but you’ll still have to concern yourself with updates – whether that means replacing a pink-tiled and carpeted bathroom, stripping wallpaper, or replacing avocado green appliances.

Seller won’t allow inspections
This one applies to those situations when you’re negotiating directly with a seller; sellers who list their properties on the MLS will expect reasonable inspections.

If you’re negotiating with a seller who balks at the notion of you performing inspections, take that as a huge warning sign. You can attempt to glean where their resistance comes from; maybe they’re simply afraid that you’ll want them to fix any issues, in which case the seller could be relieved to find that you’ll handle them (with the proper cost adjustment, of course).

But if it appears that a seller knows something they don’t want you to discover, it’s time to walk. There’s always another deal.

Lack of comps
This is important to remember: if you can’t find good comps, proceed with caution.

It’s going to be tough to determine an accurate ARV if you can’t find good comps, which is risky. Also, if you have a tough time doing comps, a bank appraiser might also have a tough time, which could trip up the mortgage approval process for the end buyer.

Make sure you have at least three rock solid comps for your property, with more always being better. Ensure that the neighborhood is comparable, as is the style, year, and amenities. The better you are at this step, the fewer mistakes you’ll make and the more profit you’ll reap.

No amount of finagling on price can make up for a lousy location. You can get a property for free and still lose money in some places. And a bad neighborhood will severely hamper your ability to rent the property if it doesn’t sell, virtually eliminating your fallback plan.

Every town and city has its desirable neighborhoods and not-so-desirable locations. These can be as broad as comparing one subdivision to another, or as tricky as one street to the next.

The price seems way too low
We typically think of a bad deal as one that’s priced too high, but the opposite can be just as true: a glaringly low price can be a warning sign.

It could be the neighborhood, as was just mentioned, or there could be serious problems with the property. Regardless, if the price makes you raise an eyebrow, dig deeper. You’ll often find issues ranging from mold to septic systems that need replacing to problematic easements.

Lack of Details
Whether you’re dealing with a property that’s on the market or have been approached by a wholesaler, be careful if there’s a distinct lack of information regarding a property.

On a listing, the agent should be able to answer any reasonable questions concerning property condition and history. This might include clarification about something on the property condition disclosure or a question about the last time the boiler was serviced or the septic system was pumped. Other issues would be left to a professional inspection.

With a wholesale deal, the wholesaler should be expected to describe the property condition in some detail and to be accurate. If they hedge on details, be wary. You want to work with wholesalers who have done their due diligence and are up-front about all potential issues. The best wholesalers are those who negotiate a great price and are accurate with their assessments on property condition.

Bad deals lurk everywhere. As always, due diligence is the best way to avoid them.

And one last note: listen to your gut. If you have a bad feeling about a property, take that under advisement. Sometimes we can’t put our finger on the problem, but we feel strongly that there is one.

As you gain experience, you’ll learn the difference between the apprehension and excitement that accompany any project and a real-deal red flag feeling. In the meantime, if you’re not totally confident, remember the mantra: there’s always another one.

What distinguishes the hobbyist from the professio...

If the first rule of success in flipping is to run...

DIY Your Fix And Flip Or Hire Help?

One of the most hotly-debated topics among rehabbe...