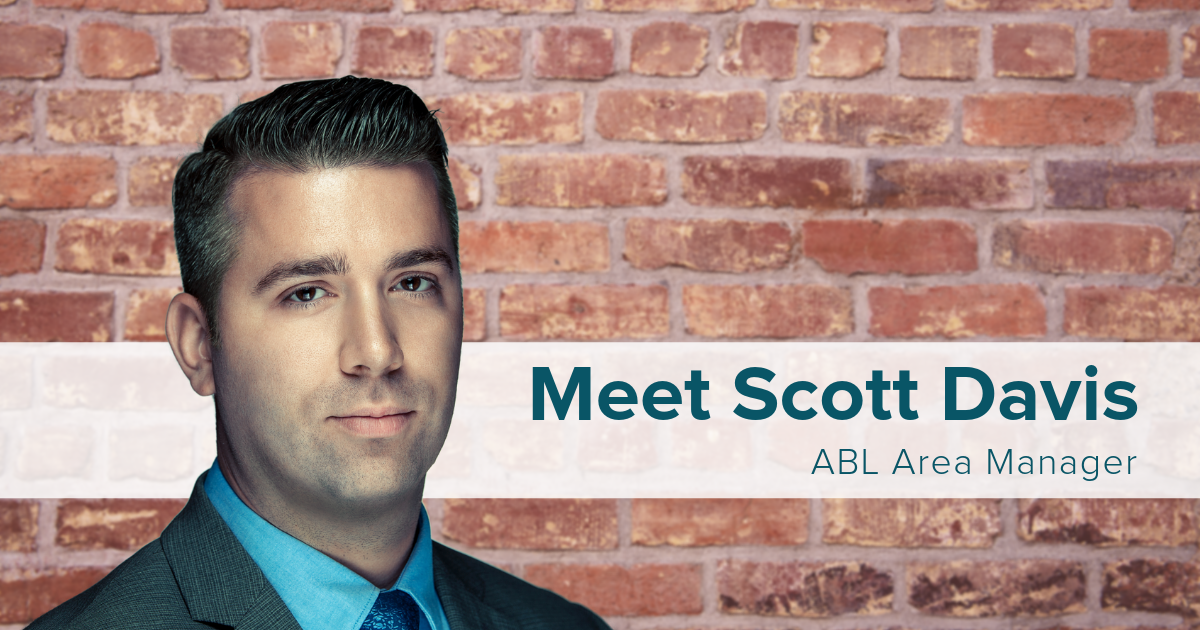 By Team ABL
No Comments

Having managed millions in assets with a nationwide territory in his previous role, Scott has perfected the art of delivering results in a fast-paced environment while maintaining his easy-going personality. Take a look at the interview below to learn more about this regional loan officer who has become an essential part of ABL’s continuous growth.

What brought you to Asset Based Lending?

I came here after 12 years at another company. I actually left that company to start a business and then our Florida territory manager reached out to me and told me about this particular opportunity, how much he liked it. I met Eric and the partners and was turned on to the notion—it was something I dabbled with and was interested in before. I liked what they had to say and here I am.

What is something you hope to accomplish while at ABL?

Make a ton of money—that’s my main goal, always. But, also professional growth, to learn. I’m more financially-driven and education-driven—those are the two biggest things for me. I’m constantly learning, there’s a lot of learning in this business.

What is your personal philosophy?

Attitude is key for me—I believe it’s the difference between everything. Also, work ethic, outworking other people. Work ethic and attitude are really what I put at the forefront and I think everything seems to fall in line after those two are put in place. I don’t really believe you can teach work ethic—you either have it or you don’t. Attitude and work ethic, those are two things I pride myself on.

Besides the distance, what sets you apart from other loan officers?

Again, work ethic. I think that I’ll go way outside of what other people will do to learn more and sound credible. I take time to understand somebody’s situation and provide the best possible solution for them—or at least give them a quick answer so they know if we are a viable option or not. I also try to be as responsible as possible no matter what time of day it is—as long as I’m not with the wife and kids. I think that that is a symbol of your willingness to help and to service somebody better than other people would. I think that goes a long way with borrowers.

When you aren’t working, what do you like to do with your time?

Before I busted my knee, I liked exercising, hiking, playing with the kids, going in the pool. A little while back I was doing some mixed martial arts—I actually grew up wrestling and doing some MMA. Also, music. I love music. I DJed for a long time, about 10 years, from 2003 to around 2013. Nowadays in my free time, I like spending time with my family and being outside as much as I can.

What is the greatest challenge you’ve had to overcome at ABL thus far?

It’s not so much a challenge, it’s just going through the motions to gain the experience. It’s a matter of falling on your face enough times in order to really understand the environment, know what to expect moving forward, how to improve your personal process as a loan officer, to be able to move faster, to be able to maneuver around in this environment. I wouldn’t really call them challenges, I think they are just growing pains. They are things you have to go through in order to get better, work together as a team, understand how people work, figure out their strong suits, and then put them all together into one well-oiled machine.

As a resident of Maryland, what do you think of the fix and flip market in that area?

I think it’s great—it’s a lot of trial and error and finding the right people, the quality borrowers. I know of a lot of people that do this. I know people who are going with low price points, I’m trying to find people who do it for higher price points—just because the volume is harder to sustain if you’re doing something in a Baltimore city. For the most part, it is a great, great market. It’s a matter of putting your focus on certain areas. I cover a lot of territories, not just Maryland. I’m all over the map so when I try to learn something about one I end up getting pulled in other directions. It takes a little while to get the whole package, but I’m going through it as fast as humanly possible. It’s really about targeting specific areas. I’d rather find the key players in each county and feed off of them and their network.

Do you think that living in one of the regions ABL lends in has helped you?

It’s huge. People have a much better reaction to you when they know you’re local. Without even asking about my experience and just knowing that I’m from here, I live here, I’ve built great rapport with people. They really appreciate it and it makes a huge difference. Having a presence, being able to say that our company is here, and having a local territory manager really goes a long way. I can tell instantly—it’s actually an instant turnoff when they find out you’re not local, in most cases. So, being in the area has probably gotten me in the door more often than maybe I would have before.

Any advice for potential real estate investors in your regions?

Get everything in a row. I would really try to understand the costs that are associated with investing and make sure you can financially support the transaction. Once you know that, you can start targeting price points and specific markets so you can move quickly. The biggest thing that I find is that borrowers—especially those who are a little more green—don’t know just how expensive these things can be, what else goes into it, how else they’re going to survive. Many haven’t even thought about paying interest month after month. Oftentimes at local meetups and such, they are told that you can find someone to fund your entire transaction. But most of the time that just isn’t true—nobody is going to fund 100% of a project for someone who has never done this before. For new borrowers, that’s always a challenge to overcome. I would really suggest calling a lender and understanding what goes into investing—money-wise. Focus on the financial aspects first, understand the numbers. Then, start searching for projects.

Any advice you wish you could give to your younger self?

No, not really—I just like to blindly go into things, I don’t like to prejudge anything. I almost wouldn’t want advice. Many people have given me advice and things to do, but every territory is different and populations of people are different in every region. I always want to maintain as open a mind as I possibly can and never judge any lead. I like to form my own opinion on things. And no shortcuts. I haven’t really found any shortcuts yet, I’m still looking.

What is your definition of success?

Just knowing what you are doing and being professional. Money is great, but to me being credible and regarded as an expert in what I do defines success for me in a given profession. Past that, more important than anything to me is my family. The success of my kids and my wife is more important than my own. But, I am big time on wanting to get to a point where people would say: “This guy knows what he’s doing!”—when it comes to this industry. That to me is a defining moment of success—being the go-to person.

Adapting And Improving With Truepic

2020 has been a turbulent year that required busin...